I have had a worrying time recently, and have bored my husband half to death with my constant observations along the lines of “I wonder if one has arrived yet?” and “Perhaps today is the day”.

As we are awaiting the appearance of our first grandchild, you might think that’s the reason for my anxiety? Well of course that’s very important, but in fact the problem has been that for the first time in 30 years, the toads have not arrived in our pond.

I have been pondering (ha! pond-ering) whether it is the new fence that has stopped them or whether I have been too tidy in the shrubbery and whether I should not have got rid of the overgrown irises at the pond edges. To try to make amends, I have crawled along the new fence and created nice deep tunnels underneath (to the interest of my two terriers and the annoyance of my husband, who has no engineering knowledge and thinks this will weaken his expensive fence).

My neighbours on the other side have known me for a long time, so they have already assured me they will put any lost toads they find through the hole by our shed so they can find their way home.

Toads can travel up to 2 km to come back to the pond they grew up in to spawn, so imagine how many fences and what obstacles we humans put in their way on that journey? They live about 10-12 years, so in theory you should get more coming back each year.  I am afraid my little band has been dwindling in recent years, and I worry that the new fence may just make them give up and change their permanent address to a pond down the road.

Luckily, I am able to tell you that today there has been movement in the pond! It’s not heaving, like Monty’s pond on Gardeners World, but there are definitely a few happy toads in there, making their “chirrup” noises and sounding pleased (relieved?) to be home. No spawn yet, but I expect a happy ending to this story, any day now.

There is something very soothing to the soul to live near water, and if you can’t get a sea view in London then at least you can sit by a pond. (By this I mean a wildlife pond, not some unnatural Koi fishpond, you won’t get much wildlife around that!)  I grew up with a mother who was a primary school teacher and every Spring we had to go frog spawn hunting so that she could teach the cycle of life to a new generation of pupils. It’s actually a rather horrid lesson, when you think of the thousands of tadpoles and how many actually make it to Froghood. Everything eats tadpoles! I used to spend my days trying to save them from newts and blackbirds etc., only to find they did something stupid like sunbathe on a lily leaf until they frizzled up.

Hooking duckweed etc out of my pond was a lengthy process as I had to help each little black blob back into the water. I have great respect for Gardeners World and Monty, but he’s absolutely wrong when he says to just “leave the weeds on the side of the pond for a while and the creatures will crawl back in”. They jolly well don’t, and you go back to find these poor little Ramshorn snails and water slaters gasping away on the bank, or worse, idiotically crawling away  from the pond. The only things that seem to be able to wriggle back in are leeches and diving beetle larvae (– which also eat tadpoles…).

Anyway, I am now older and wiser, or perhaps just have better things to do. We have so many toads and frogs that come back to our 30 year old pond every year that it has dawned on me nature carries on working without needing my help. I do still net the pond at mating time when the Heron and Crows come down for party snacks, and I don’t mow near the pond in July when the froglets are leaving to make their way in the Big Wide World, after one traumatic year.. It seems to work!

Apparently 1 in 7 of us now have a garden pond, which act as a network for wildlife since so many agricultural ones have gone. Our recent survey of CABAHS members showed that 32% have a pond, so we are much better than the average! Apparently in 1890 there were 1.25 million ponds in the UK, a mix of natural ponds and dew ponds created by farmers for livestock. About 70% of those have been lost or are polluted with fertiliser and pesticide run-off. Or salty runoff from de-icing the roads. So garden wildlife ponds are increasingly important, not to mention a whole lot of fun!

Here are some pictures of mine, trying to turn itself into a bog garden at this time of year, but very full of life. 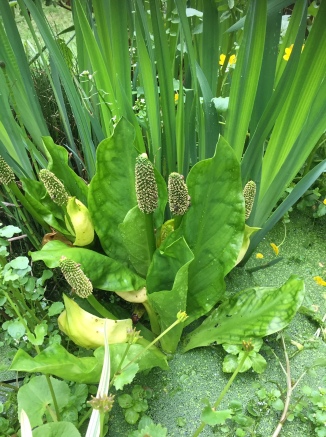